Adam Burt – Being a Man of God

In a society that celebrates and pushes soft spoken, avoid conflict at all costs ways of thinking; it’s refreshing to have someone show us God’s plan for what it means to be a man.

How many of us do something in life because we saw someone else do it? Whether it’s a friend, coach parent; we get excited when we see someone we admire doing something we want to do. Adam Burt was raised in Detroit in a house of Red Wing fans, Grandfather worked on the Red Wing Alumni team, and his dad was a hockey player. It’s no shock that Adam wanted to be an NHL player. Because of his hard work and dad’s coaching, Adam achieved his dream, but there were other influences that would change his life forever.

Adam was raised in a house that knew the idea of God, but probably didn’t have the personal connection yet. “Christian? That is kind of a broad term. My dad was kind of a nominal Catholic and my mom was agnostic. I remember asking my mom as a little kid, ‘What is heaven like’ and she would say that you get to eat whatever you want and you never get fat. I believe that to this day and hang on to that! After mom and dad divorced, my mom in her brokenness was drawn to a church. And she ended up at this really crazy kina Pentecostal church and she heard the Gospel of Jesus and He saved her. Now of course she wanted the same for her children. So she invited us to church one night and I saw a real cheesy movie on the Rapture but when the alter call came I found myself going up and giving my life to Jesus. Jesus became a part of my life and not just some religious activity or exercise. I was about eleven when this happened and He has been with me ever since.” 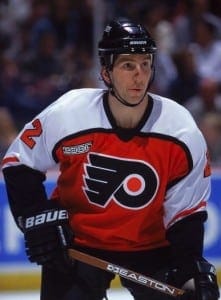 Adam Burt was a hardnosed NHL player but his path to the NHL wasn’t very clear early on. “I was always a horrible player! The only reason I made the team early on was because dad was the coach. But he always said that every time I fell I’d get back up and tried again. I guess that’s what defined most of my career.” But as time went on the effort and training paid off. “I was about 13 when dad started to notice I may have something. We had started talking about agents and I was called up to play with older squads and kids. At the age of 16 I was drafted to play in the Ontario Hockey League in Canada. That’s when it all got started.”  Now at the age of 16, Adam was a new believer and wasn’t exactly a mature Christian yet. “I was ready to give some of my life to Him, but I still wanted to live my life. Oh, I’d read my Bible or go to church, but that didn’t mean I’d stop partying or carousing around with the ladies and just feel like junk afterwards. I’d always say, ‘God I’ll never do that again!’ and then go out and do it again the next week! It was a real rollercoaster ride with my faith as I look back now it was a real struggle. I know that it was God trying to get that old me away. I finally realized that I needed to let Him be in control during the NHL draft. I was supposed to go 12th overall. My whole town of Detroit had been ready for it and it was a real big deal. Then the 12th pick comes up and they announce that the St. Louis Blues have selected from the Centennials, which is my team at the time… Keith Osborne… It was a real humbling experience especially since he was a teammate of mine. I saw the disappointment on my father’s eyes and I felt like a bit of a failure. Long story short, I had the Brady Quinn or Johnny Manziel moment because I didn’t end up getting picked until late in the second round. It was a real turning point for me. I said to God, ‘Hey, I really suck at doing me. I am ready to give you all of me and not just try to do this part time.’ It was a real maturing point in my walk. I haven’t been perfect, but there has been a whole different level of dedication. It was a huge defining moment for me at 18. That is when I came under the Lordship of Jesus.”

Even though Adam was under new ownership it didn’t change the fire and determination he had on the ice. “People try to say especially in hockey that becoming a Christian can make you play softer. I even had one coach tell me I had to stop reading the Bible in front of everyone on the plane my rookie year. Now there were guys reading magazines that you had to turn sideways and unfold a third page, and that was OK. But reading the Bible somehow didn’t make you a man. This kind of persecution was kind of weird to me. I never thought being a Christian was a sign of being soft. I even had a debate with a fellow player who told me that it is a sin to fight. I said, ‘Bro the Bible says it’s better to give then to receive!’. I really never saw a problem with the many scraps that I got into because I always thought that ‘whatever you do, do it hard as onto the Lord’. And when I would fight on the ice it would be Godly because I was standing up for a teammate. There are definitely times when there is a righteous and an unrighteous way to deal with things, and in hockey or any other sport the lines can get blurred. If I crossed the line I knew I needed to repent. The reason I referenced the other guy is that he later came back to me after retirement and told me he was wrong. The reason he questioned me and the faith side is because he was afraid to stand up like I did. It is good to stand up for what you know is right! Be physical and be tough as long as it doesn’t cross the line.”  Early in his career Adam didn’t find the opportunities to witness that he did later in his career. “Early in my career there were maybe 5 or 6 Christians in the league. Everyone knew where I stood though. But later in my career when I got older and became the veteran on the team I found it easier to love on some of the younger players coming up. We had one guy, Darcy Hordichuck who was a tough guy throughout the league… We baptized Darcy in my bathtub in Atlanta when I was with the Atlanta Thrashers.  While I was in Atlanta I was also able to host a few Bible Studies at my house. One of the guys that attended was Dan Schneider who ended up getting in a car wreck and passed away. My hope is that as a result of the studies that he found the Lord and went home.”

Adam ended up playing for the Hartford Whalers, Carolina Panthers, Philadelphia Flyers, and the Atanta Thrashers from 1989 to 2001. As a defenseman he was a hard player and defended his teammates without fear. After the ice Adam was called by the Lord to keep working on spreading His message. Adam serves on the pastoral staff at Morning Star Church in New York City and is the Pastor for the New York Jets. Because of his past profession he has been able to relate to the athletes and work on their level. “We as men tend to compartmentalize our faith. My faith is here and everything else is here. Christianity becomes something I can just check off my list as an activity verses allowing Jesus to being the overlying driver for everything that we do! That is also just as much a problem that we hear spoken from churches as well. The message comes out at times that we ‘Just have to live morally…’ without understanding the true meaning of the kingdom and power of God and true submission to His glory. That is why for men it is not always a very compelling message that they hear and find it tough to follow or understand from some churches. That’s why they have so many freaking super hero movies out now! There is something in the male soul that they want to do something heroic. It’s intrinsic within us! So when the message is just, ‘Oh, just love and be a good guy and go to church…’ the message can tend to fall short from what I think God is calling men to be. Men want to have that story ‘Hey I laid my life down for my family…’ I mean if a wild animal comes into your home and wants to hijack your family you want to say ‘I’m that guy that took care of that!’. So we need to lift up Jesus. He took the ultimate sacrifice and He took the hit. That’s who He was and that’s what we need men to model themselves after. We need to let the word take on flesh and lift up men that are not afraid to be men modeling this. I see this every day. Men that are full of the Lord and passion and want to truly change the world for His kingdom! That’s what motivates me too… Men who are men on fire for God.”

In a society that celebrates and pushes soft spoken, avoid conflict at all costs ways of thinking; it’s refreshing to have someone show us God’s plan for what it means to be a man. Yes Jesus told us to turn the other cheek, but he also turned over the tables in the temple! The Bible also cautions us in Revelation 3:15 “So, because you are lukewarm—neither hot nor cold—I am about to spit you out of my mouth.” Don’t be afraid to be who God wants you to be. Thank you Adam Burt and may God bless you and your family.

You can hear more of Adam Burt in SportsFaith Interviews.