At what age are players ready for the NBA?

The NBA’s decision in 2006 to require players to be nineteen in order to be draft eligible stirred up a host of competing reactions. From most players’ perspectives, of course they’re ready to enter the pro arena at age eighteen (and what’s the point of waiting just one year anyway?). From the NCAA’s perspective, the value of their March Madness revenue just increased. Some big time college coaches relish recruiting one-and-done players to propel their team to a championship, whereas smaller programs that cannot hope to entice such players see the recruiting style as superficial, bordering on unethical. Then of course those who actually care about the “student” part of athlete have to scratch their heads at the purpose of earning two semesters of college credits then leaving.

Some feel the age requirement should be even higher, age twenty. Others argue that, over ten years since the change, the age requirement has not had its intended effect—to get pro scouts “out of high school gyms” in Commissioner David Sterns’ words. So why not return the eligibility age to eighteen?

There are exceptions, but in most cases, those entering a workforce without attending college must have a mature, tested character in order to succeed. Granted, there are jobs where eighteen-year-olds can acquire hard-earned experience and take on the rote responsibility needed to build a firm foundation for positive, mature lifestyle skills. An NBA basketball player is not such a job. In fact, on a scale of difficulty (assessing contributing factors of social, emotional, and physical pressure), a professional athlete probably rates most difficult among American professions today. This is a deception to many young people who only see the thrill of the occupation when they watch a LeBron dunk or a stadium erupting with cheers. The game is merely that—a game, a show, an experience ruled by the principles of real life, but at the same time not a real life experience.

So the 2006 agreement pushed young men either to attend college for a year or continue playing basketball overseas or in the developmental league. Wisely, the majority of eighteen-year-old athletes are being ushered into college, a place where they can be surrounded by accountability and trained in some of the life skills necessary to succeed in an adult world.
But will they have gotten enough of these skills in a short year’s time?

Yes, perhaps, for some. 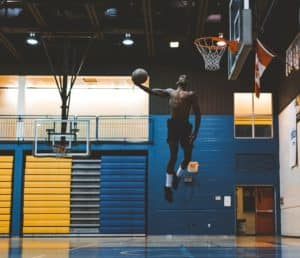 For many of the players aspiring to be the next Michael Jordan, they need more years of service time as an apprentice. Maybe some of the seeds have been sown—how to handle the pressure of failure, how to respond to taunting, how to balance a check book—but unless these seeds are watered and tended, they will not grow. They will not reach maturity. They will not produce fruit.

This is much like how Jesus refers to new believers in the parable of the sower. Someone who is planted in the faith but not discipled for an adequate amount of time will be like the seeds that “fell on shallow soil with underlying rock.” Initially, they are promising and passionate, like the seeds that “sprouted quickly.” But because the soil is shallow, “the plants soon wilted under the hot sun, and since they didn’t have deep roots, they died” (Matthew 13:5-6). In contrast, the new believer who walks alongside a strong mentor, who stays close to his Bible, and who commits to attending a church fellowship, can over time grow into a leader and a guide to others.

It is human nature to want to rush in to the full responsibilities of adulthood because every person longs to be known and to gain the pride of self-sufficiency. But in order to truly handle the immense challenges of adulthood—to fully understand that the fallen world by its very nature opposes our meager attempts at order, peace, and prosperity—a person must practice dependency rather than self-sufficiency. Dependency happens within the context of relationship. When we realize that we were designed to reach out to, relate to, and serve others throughout life’s seasons, the crushing burden of perfection can be lifted. Learning environments (such as college basketball teams) are deliberate about cultivating relationships and guiding a person’s progress. They can teach young men that even though they may have exceeded people’s expectations for most of their lives, they still need what everyone else needs—discipline, love, acceptance, a purpose beyond what they do.

As the NBA and the players’ association continue discussing (and perhaps adjusting) the draft age, they should carefully consider the impact their negotiations have not only on players’ careers, but more on players’ lives and personal well-being. We live in a society that wants to microwave everything, including personal character. Even though the world has changed, human nature has not. Some things are better developed slowly and deliberately, over time.