Baseball Chapel: A Home away from Home

Brewers’ pitcher Chase Anderson comments, “It’s very solid and a good system. It’s kept me on fire and in the word.”

Many of us have a deep-seated memory of edging around the sidelines of a baseball stadium, waiting for batting practice to end so that we can catch the attention of that one player walking back to the dug out. These memories often begin when we’re seven or eight, old enough to remember but young enough to feel the awe of standing before a legend suited in team whites.

How many young boys have dreamed of one day standing on the other side of that fence? To be the player at the plate, waiting on a Clayton Kershaw fastball? Nothing could be purer, it would seem, than being a major league baseball player.

But the purity of the dream is often far afield from the reality of the rigors a major league lifestyle affords. One of the deepest challenges professional baseball players face is the sporadic, unconventional schedule they must keep. It is a schedule that does not stop for a sabbath rest on Sunday, a reality that can force many Christian players to abandon regular church attendance.

This dilemma was the motivating factor for Detroit sports writer Watson Spoelstra to approach baseball commissioner Bowie Kuhn and ask permission to organize a chapel program for every major league team. With Kuhn’s approval, Baseball Chapel was created in 1973.

Today, chapel services are held on Sunday mornings at every major league and minor league stadium throughout professional baseball. Most teams also conduct mid-week Bible studies, as well. These services are available not only to players but also to umpires, coaches, managers, trainers, office staff, and members of the media.

Current Baseball Chapel president Vince Nauss expresses the benefit of Baseball Chapel being an official organization.
“It allows you to have a network. Chaplains communicate with each other across the divide of teams and professional levels. So if a guy is being sent up from AAA to Milwaukee, the chaplain in AAA can contact the chaplain with the Brewers and tell him to look for the new guy.”

In a world of inconsistencies, the consistent fabric of Baseball Chapel is a vital touchstone for many players.

Brewers’ pitcher Chase Anderson comments, “It’s very solid and a good system. It’s kept me on fire and in the word.”

In Anderson’s case, he started attending Baseball Chapel in 2012 after the sudden death of his father. This moment in his life proved to be a major turning point in his faith.

“I grew up quote unquote Christian, but didn’t really get serious about my faith until my dad passed away. I realized that I wasn’t in control of everything in this life. When that happened it threw me for a loop. I recommitted my life to Christ and Baseball Chapel was my church.”

A major league pitcher is perhaps most familiar with the challenge of letting go of things he cannot control. The weather, the noise from the crowds, the ache in his left calf, his wife’s frustration with a child, his ability to throw strikes—these are factors he cannot control when he takes the mound. Instead, he sticks to the things he can control—how he thinks about these factors, how much he practices, how to breathe to calm himself down.

The same is true of our lives, with death being the most punctuated example of how little we are able to control our circumstances.

“Initially it felt like a dream,” Anderson remarked, “like some fantasy land. I had just seen my dad four days ago at spring training.”

By turning to Christ, he realized that even though he couldn’t control the circumstances of his life (nowhere between his fastball and his father), God was in control of his life. This truth brought tremendous hope and solace to his life.

Although painful to walk through the season of his father’s death, Anderson also became more profoundly aware of the tremendous impact his father had on his life.

“One of the hardest things was that when I finally got my major league debut in 2014, I knew he wasn’t out there watching me. I know he was watching me from above, but he wasn’t physically watching me pitch that game, and it really hit me hard at the time.”

Now that Anderson is a father to son Hunter, and he and his wife Anna are also expecting a daughter during spring training, he has a new appreciation for the role his father played in his life and in helping him establish his career.

“My dad would mow extra lawns to pay for a new glove to go play travel baseball. He’d put his life on hold once my parents got divorced so he could afford to take me to different baseball venues around the country. He saw that I had something. Maybe as a kid growing up I couldn’t see the talent that I had, but he could see it. He pushed me at different points of my baseball journey.”

The pain he experienced has ultimately brought him a richer love for his father and a deeper appreciation for his wife and children.

“My wife makes sure that we’re not separated for more than seven days at a time.” 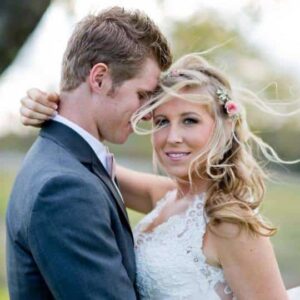 This means that she takes a road trip with Anderson at least once a month, and that includes bringing along Hunter and all of the accouterments that come along with a toddler.

His wife also chose to retire from her job so that the family could be together more consistently.

“She worked for a couple weeks after my debut and I told her we needed to be together. Even if I got sent down to the minor leagues and made less money, being together was just more important than the money.”

Still, the Andersons are separated throughout the baseball season, and this is again where the support of Baseball Chapel can strengthen players.

Nauss explains that the team chaplains are available to players for any number of scenarios.

“Some players set up individual meetings with chaplains to talk through a certain issue. Others might ask a chaplain to perform their wedding and sit down with them for pre-marital counseling.”

For many players, just gathering regularly with a group of 15-20 guys who love the Lord can be the encouragement they need to stay focused on Christ and cope with the challenges of their career.

Anderson admits, “There’s a lot of temptation out there, especially when you get to the big leagues and start drawing a decent pay check. You think you have the world by the tail. You can buy whatever you want to buy; you can do certain things you probably shouldn’t do. It’s a very tempting lifestyle to be in.”

With the accountability of 15-20 other like-minded guys, however, players like Anderson are spurred on to stay the course and honor the Lord.

“The biggest thing is to keep your eyes pure, to keep your heart pure, and to make sure you’re living the Christian lifestyle so that people around you can see that example.”