“I don’t identify myself as a baseball player. I’m just a guy who loves God...

According to Jeff Passan in his book The Arm, “the pitching arm [is] the most valuable commodity in sports.” Having said that, he goes on to grimly add “more than 50% of pitchers end up on the disabled list every season…and one-quarter of major league pitchers today wear a zipper scar from Tommy John surgery along their elbows.”

Brewers’ southpaw Brent Suter joined ranks with the zipper scars last season after he tore his UCL in July. He’ll be unavailable throughout the first half of the season.

For players who are forced to take a seat, working through injury can be tedious and disheartening. They might experience a profound sense of loss, for some the death of a dream, accompanied by the same question so many people ask when something doesn’t go as planned: Why?

Why can take on two different levels, however.

In Suter’s case, he never questioned why he now has to be sidelined for an entire season. Or why him instead of another pitcher.

“I knew as a baseball player there were risks.”

Injury is a natural liability of his profession, and he was the one dealt the bad card in this round.

Even with the careful science of pitching today, the human body continues to be inexplicable and unpredictable.

Previous to the era of pitch counts, “Greg Maddux…never did break over a twenty-three-year, five-thousand-inning career.”

At the same time today there are teenagers getting Tommy John surgery, reconstructing their ligaments even before entering the possibility of a professional career.

Those odds are hard to explain. From Suter’s perspective, he didn’t need to understand those odds in order to soothe his mind.

“Honestly I just had an attitude of thankfulness that my arm lasted this long, that I was able to get to the big leagues. That was the overwhelming thought more. Thank you God for giving me this health that I’ve enjoyed most of my career.”

If any question did linger in his mind, especially now as he begins a slow return to a throwing routine, it was a different type of why.

Naturally, this line of thinking can be practical, beneficial. Suter’s trainers are likely asking the same questions, putting a plan in place that will prepare him for a healthy, even stronger come back in 2020.

But without balance, this type of thinking can also confound the senses. Sometimes it is impossible to understand the precise cause of something like an arm injury. Draw this further into life, and we can rack our brains over why our baby won’t sleep at night, why our car died, or why we didn’t get the job. There is an element of the inexplicable in our world that time after time we are called to accept rather than solve.

Solomon addresses this dilemma in Ecclesiastes 8:16-17: “I tried to understand all that happens on earth. I saw how busy people are, working day and night and hardly ever sleeping. I also saw all that God has done. Nobody can understand what God does here on earth” (New Century Version). 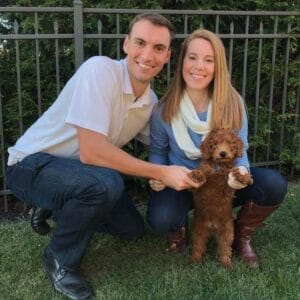 Brent Suter with his wife and puppy

God gave us intelligence in order to reflect on our problems so that we can attempt to solve them and prevent them. It is our responsibility to do so insofar as it is within our power. But when we fall into the realm of overthinking, attempting to solve something that we really don’t have a way of understanding, we can grow frustrated, bitter, and even angry at God.

So how is it that Suter has been able to remain his old cheerful self even amid the unanswered why in his life?

“I don’t identify myself as a baseball player. I’m just a guy who loves God, who is a child of God, and plays baseball for a living. That’s a big separation that can really help people when they get injured, or with retirement, or when they stop playing. I’m not identified as this thing I do. I am a child of God and that’s my identity.”

There is freedom in knowing our worth is not based in our performance, whether it’s on the pitcher’s mound, the courtroom, the operating room, or anywhere else.

This season Suter will be accompanied by his wife, who has a one-year leave from her teaching job, their newborn son, and their dog. Although his contributions will be from the dugout, he is optimistic and excited about the opportunity God has given him.

“I’ve been accepting [my injury] and embracing it as a new challenge, a new adversity that can make me stronger.”

Passan, Jeff. The Arm: Inside the Billion-Dollar Mystery of the Most Valuable Commodity in Sports. Harper: New York, 2016

Brent Suter has invited fans to join the #BrewCrew to #strikeoutwaste by committing to using only reusable water bottles to help eliminate waste. Tweet a photo of our crew using reusable bottles with #strikeoutwaste.