Dana Cranston received the call to take her game to the next level when she didn't expect it. And it wasn't just for volleyball.

Being discovered is the dream of many athletes, musicians, and actors. You work hard, pay your dues and hope that you do something that allows you to stand out above the rest of the competition so you can move on to the next level of success. You never know when you’re going to get the call to go in, but when you do you better be ready. Your call may come when you least expect it, kind of like a thief in the night. For Canadian National volleyball player, Dana Cranston, she received the call to take her game to the next level when she didn’t expect it. And it wasn’t just for volleyball.

Playing volleyball has always been in Dana’s life, “I’m from Fort Saint John British Colombia which in on the Alaska high way. My parents played volleyball a lot when I was growing up on some pretty competitive teams, so I would mess around with my brother and sister in the corner of the gym. I got to see some real good athletes play while I was growing up. Watching them and my parents taught me so much and I grew up with volleyball being pretty much the center of my world.” 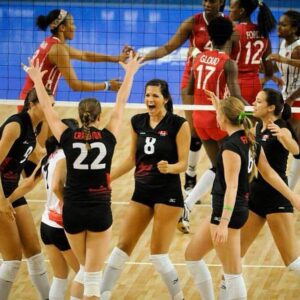 Volleyball as a constant in Dana’s life paid off. “I was so, so blessed to receive a scholarship to Colorado State to play volleyball, but it was a hard time for me as well. I graduated high school in 2009 and went to Colorado for four years on scholarship. During the summers I played on the Canadian National Team every year except my junior year. My coach was getting some new people in the system and a lot of the girls did other things. I had to get my wisdom teeth pulled which takes more than 10 minutes to recover from, so I took the summer off.

My school team every four years does a European tour, so we went over to Italy and Paris for two weeks which was so fun. Last summer (senior year)was my first real big summer as far as exposure and playing in tournaments after my senior year. There were a lot of real big tournaments. I was able to go to the FISU games in Kazan, Russia. It was a real cool trip. It is like a mini-Olympics for people in university. AIA (Athletes In Action) sent some people over and it was so neat to meet up with them and pray over the games and have that as part of the experience. It was neat being in such a different place but having people come together from different places who believe the same thing as you and to pray together.

We also travelled to U of Washington and Omaha as well and I was able to play a big role in that tournament.” Unfortunately Dana didn’t make all the tournaments. “My team travelled to the Pan-Am Cup, but I couldn’t travel because I dislocated my pinky, which is SO awesome! It is the worst injury because THIS is hurt, but I can’t go! It’s just my PINKY?!?”

Even though volleyball has been such a gift that has provided experiences that many of us could only dream about, it is not what has given Dana her ultimate satisfaction. Dana was about to get discovered. “In my first year of college I was really home sick. I was coming from Northern BC to Colorado. I flew by myself with two suit cases moving into the dorms. My life looked a little different than most of the people around me you know. When I was in fall camp I was super busy so that wasn’t so bad, but when school started I was like Whoa! I am really here by myself and my family is so far away. I was really close to my family, and I am still very close to my family. They have done so much for and are so loving and supportive and I’m so grateful for that, so it was just a huge change.

So, a senior on my team asked, ‘Dana… I’m having a Bible study would you like to come?’ her name is Kaitlyn. I’m like OK! I just want to be around people so YEAH! I went to her house and a lot of the team was there, like six or seven were there. Kaitlyn started by going through the book of John and she said, ‘Ok everyone open to the book of John.’ I’m like, uhhhh, ok… I have no idea where that is… I knew nothing! But Kaitlyn just said alright and taught me from scratch. I learned who this guy Jesus was by going to her Bible study every week.

After a while she asked if I wanted to go to church with her and I started to do that as well. In October of my freshman year we were about to take communion at her church and Kaitlyn said, ‘You can’t have this. This is Jesus’ blood and body that He gave up for us. If you haven’t accepted that gift from Him you can’t have communion.’ I said ok. But Kaitlyn wasn’t done. She asked if I wanted to do it right now and I said sure. So we prayed in church and I took communion. I cried the whole time and most of that day. I didn’t fully understand what I had just done but I felt different.

The rest of that year was a process. She discipled me and mentored me for a whole year. The Christmas of my sophomore year the AIA leaders of my school called me and asked if I’d be on the leadership team. I had only been to like three of the meetings because of time and so on. I told them I was not sure because I was so new in my faith. I’d only known the Lord for a year and I didn’t know if I was ready. They told me they thought I should do it, but pray about it first. I decided to join the student leadership team and loved it! It was such a good group of people. They were supportive and all knowing the Lord. It really catapulted my faith walk by being around these other people and working side by side with them.

One of the leaders said that he had never seen someone pick up Christianity as quickly as I had. He said, ‘Before you were living a Christian life but had no idea why. Now there is purpose behind your choices.’ And that is so true. My family always raised us with great morals and to do the right thing. Now I know God has control and so many great plans for my life.” 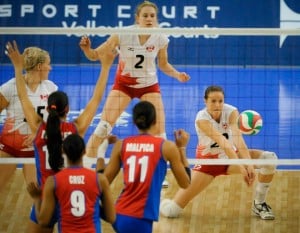 During the summer Dana plays and trains for the National team. The rest of the year she plays professionally which was a huge childhood goal that became a reality. This reality is when Dana needed God more than ever. “I was able to play over in France professionally and it was definitely a really hard year and probably the hardest year. God took me out of this comfort zone I had and this huge community at school and plunked me into a little bit of a darker place. Europe is a little different as far as faith. Even the team mind set was different. The players are all being paid and we have to perform, but there is a different attitude. If I would miss a set back home, I’d say ‘Hey I missed that.’ And my team would pick me up and vice versa.

On the pro team if you mess up you may get a look like, ‘Yeah, you DID just miss that! It better not happen again!’. Players are more about themselves verses the team. And a team may consist of players from all over the world. I had a player ask me, ‘What are you doing?’ when I was praying before my meal. I explained I was thanking Jesus for my food. She asked ‘Why?’. I explained and she said, ‘I don’t know if I’m comfortable being on a team with someone who goes to church.’. But who knows what seed I planted. Someday God may use that experience to come into her life.

During this time AIA had a SKYPE Bible study for pro athletes and there were six of us who play volleyball that participated. The study was led by a guy from Winnipeg actually. It was so nice to meet on a weekly basis to just talk about what was going on, what struggles you were having, and what others were going through. This was so helpful! About half way through the year I found a church and they were so awesome! The family who ran it had me over the first day for lunch and made me a huge five course feast. They had a girl there translate the service for me and the pastor said to me, ‘Isn’t it cool how God’s body is everywhere?’. So God was loving on me in a small town in Southern France. I learned a lot about myself. Confidence in myself and confidence in God… Serving Him instead of just thinking about myself.”

A huge stage for Dana’s faith could be the ultimate stage for volleyball. All the tournaments and experiences are pointing to that ultimate goal which is the Olympics. “We are one year closer to the Olympics and it is getting a little more intense. Canada has been to the Olympics for volleyball three times but not since the ‘90’s. So our goal ultimately is to make it for this squad. We have to qualify out of the NORCECA zone against teams like USA, Dominican, Puerto Rico, Cuba, and Mexico. These teams are good and last year we got fourth, but we have to be in the top one or two at these qualifiers. Especially if USA does well at Worlds or qualifies another way it is important for us to do well at the NORCECA qualifiers. But, God has really brought into perspective what is important.

With all the travel, and tournaments it is so easy to get off track and sleep in forty extra minutes and not do your quiet time with God. But I try to do that every day. When volleyball was the main thing in my life the Olympics was it. It is still a great goal, but now that I have Jesus it’s not about me anymore. It’s all to glorify Him.”

Hear more from Dana in the “Media” area of SportsFaith.