Does church belong at the ball park?

Sports today are filled with players who are very outspoken about their faith in Christ. Does church belong at the ball park?

Sports today are filled with players who are very outspoken about their faith in Christ. In many cases, players feel their platform as a celebrity athlete allows them the opportunity to share the gospel with a captive audience.

However, Major League Baseball is diligent in protecting players’ rights to freedom of religion as well as freedom from religion. Along this vein, many voices have been critical of an organization known as Baseball Chapel and the ministry it provides to players, coaches, staff, and umpires. Although Baseball Chapel is elective, some people are uncomfortable even with its presence in the clubhouse, accompanied by the voices of players and chaplains regularly inviting them to chapel.

In his book Onward Christian Athletes, Tom Krattenmaker advocates for a more ecumenical religious experience within clubhouses, rather than sports (particularly major league baseball) being dominated so heavily by evangelical Christianity. He is particularly wary of people strong arming players into a belief in Christ.

He writes, “Those who run Major League Baseball would do well to insist that the ministry’s chaplains approach evangelizing with appropriate sensitivity, that they refrain from pronouncing other beliefs insufficient.”

This can be a challenge, since Christians’ core belief rests in Jesus’ proclamation, “No one comes to the Father except through me” (John 14:6).

Christianity by its very nature does declare other beliefs insufficient. This is not a popular message in today’s American culture, which celebrates diversity and tolerance. Yet the message of tolerance reaches a point of absurdity when it crosses over the line of truth.

If you’d like to believe that grass is pink instead of green, I could let you go on believing that so that I wouldn’t offend you or imply your viewpoint is inferior. But that wouldn’t change the fact that grass is not pink, and I’d be lying to you if I didn’t tell you so. 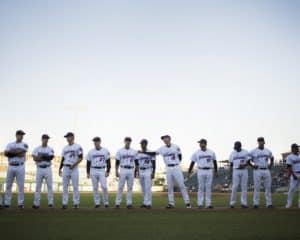 Does prayer need to be in sports?

It is very important for Baseball Chapel leaders to know their audience and then deliver the message of Christianity accordingly. Since their services are housed in a secular facility, they should be aware of how their message might impact non-Christian players, especially when those players are approached via a Christian player who attends Baseball Chapel. This becomes even more complex if that Christian player is a new believer, still learning how to comprehend and express some of the complex truths of Scripture.

Naturally, everyone should be free to express his religious beliefs. But religious beliefs are divisive, and in the high-profile, highly-political culture of professional sports, it would be wise for Christians to use care when proclaiming the truth that Jesus is the only way to salvation.

Jesus himself did not hide the truth, but used care while revealing controversial spiritual truth to his audiences. This was true when he drove out demons (he command the demons in Mark 1:24 to be silent because they knew he was the Son of God), when he healed (he commanded the leper in Mark 1:40 not to reveal that Jesus healed him), and when he discussed his Messianic identity (he told his disciples in Matthew 16:20 not to tell anyone that he was the Christ). In these instances, did this mean that Jesus wasn’t doing his duty by spreading the whole truth of his identity to his audience? Was he failing to warn people that they were in danger of going to hell, essentially, by commanding this silence?

This is the dilemma some Christians face when pressed with the command to “go make disciples of all nations” (Matthew 28:19). It is hard to feel obedient to this calling if we in some life situations withhold the truth of the gospel from others. Yet, Jesus knew that if his identity were revealed too quickly by the demons, the healed, or his disciples, this could damage his opportunity to fulfill the Father’s purpose for him while on earth.

In the same way, the ministry of Baseball Chapel has been given a unique opportunity to situate the gospel directly within a secular institution. This does not mean that chaplains or Christian players need to make the message of the gospel an “inclusive one” as expressed by one of Krattenmaker’s sources. That would be saying the grass is pink.

But it also means that evangelizing does not need to be a form of entrapment or peer pressure. It doesn’t have to be a sledge hammer delivered with such determination and immediacy that it frightens people into believing (as was so popular during Jonathan Edwards’ day).

Time and again, players like Brewers’ Chase Anderson have remarked, “Guys will say to me, ‘There’s something different about you. Why are you so happy all the time?’”

This exchange alone packs more punch than any warning of hell and damnation. It opens the door to relationship, which in most cases is dominated far more by action than by words. If Baseball Chapel exists in the clubhouse and Christian players are being filled and sent each Sunday, then God’s Spirit will be living and active in the secular arena.

Does church belong at the ball park?

The church belongs everywhere this world will permit it to enter because every part of the world needs the message of the gospel. But as the church we must also be wise in how we share our love of Jesus and our conviction of the truth with others. We are not failing in our mission if we don’t turn every moment into a witnessing opportunity. And in some situations, such as the confines of a baseball stadium, saying too much can damage the church’s opportunity.