Erik Kratz: Embracing the Loss, Hungry for the Win

After eighteen seasons on and off major league playing fields, Erik Kratz has gotten a taste of the win. A 2015 World Series ring with the Royals; a 2018 dramatic push to the Series with the Brewers—Kratz has gotten as close to the center as any baseball legend.

But the reality is, he has known much more about loss than victory over the course of his career.

He’s lost his place on team after team over the years, sometimes even after making significant contributions to the team’s success. Along with the loss of a team, he’s had to let go of relationships he’s formed with players, coaches, fans. He’s had to sell houses and find new ones, and he’s had to subject his family to the entire process, as well.

It’s hard to see loss as a win.

But Erik Kratz hasn’t lost. Currently, he’s working with the Giants after being traded from Milwaukee in March. He’s on the active roster, catching alongside Buster Posey. They haven’t sent him out the door yet, and he’s nearing forty.

Still, he’s had to learn how to thrive within the dynamics of a career that places the game, not people, at the center of its radar.

The key to his success? Placing people, not the game, at the center of his radar.

“Baseball is so much about human behavior. Totally is. Everybody pretty much has the same talent at this level. There are a couple guys that play better and stand out, but the game is really about how people deal with the stress and the thrill of competition.”

As a catcher, he’s had the opportunity to see guys at their best and their worst.

Not only does it take a certain degree of maturity to realize the importance of a working relationship, but it also requires confidence and genuine concern for the other person’s well-being. Certainly good teams, made up of good teammates, possess a certain degree of empathy, but even empathy can be rooted in a self-serving motivation: the desire to maximize everyone’s potential in order to win.

Empathy becomes another tool of the trade.

For Kratz, however, empathy has a much deeper purpose. His entire reason to be a ball player is to get to know and understand his teammates so that he can share Christ with them. He has learned in his long years of competition that his purpose in Christ is the only foundation that doesn’t slide senselessly out from under him. And he has seen the torment and the anger the business of baseball creates for men who are trying to make sense of it.

“Day-to-day I can’t lean on my own understanding. That’s something I’ve gained from reading the Word regularly.”

If that’s something he can share with his teammates to help them get through their rough spells, then he’s done his job.

One of the most striking qualities of Kratz’s demeanor is his careful, thorough nature. He seems to be tremendously balanced in a world that often tilts and tangles people in a vortex of winning. Within this balance, he holds a profound hunger for winning, yet checks his competitive spirit at the door when it infringes on the higher priorities of his life. 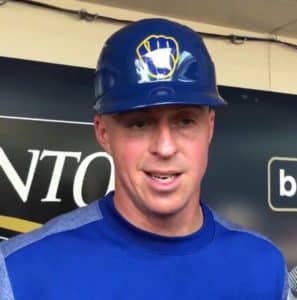 Kratz as a Milwaukee Brewer

When asked whether God cares about winning or losing, he was not a bit confounded, nor did he try to read God like a magic eight ball the way some players do. One of the most interesting superstitions he’s witnessed was during Baseball Chapel, when guys would leave their bats in the room and come back to pick them up again after chapel. Kratz has no desire to judge or analyze another person’s walk with Christ, but his belief in God’s concern for the game is much more relational than mythological.

“I don’t think God doesn’t care about winning—I know he cares. I know he loves each person that is in that situation—a fan, a player, a referee. And he cares about the people far more than he cares about winning and losing. I can’t answer if he wants a certain team to win or not, but I also can tell you that he’s not worried about if you win or lose.”

It can be easy to get wrapped up in the concerns of this world because these concerns are immediate and tangible. These are our responsibilities—the jobs and the kids and the food on the table—but we cannot forget that there is so much more. This is the confidence Kratz exudes when he talks about his daily walk with the Lord. He doesn’t get bogged down in the statistics, the transactions, or the number of houses he’s bought and sold.

Have there been benefits of being with so many baseball organizations? With a chuckle in his voice, Kratz responds, “I’ve gotten a lot of t-shirts.”

More, he’s been exposed to many, many people who can hear his vision and sense the aroma of Christ in his presence.