The world of sporting events has headed for the collective locker room. And everyone wonders, “now what?’

Fields, rinks, arenas. All are silent. There is no talk at the water cooler about last night’s game, because there wasn’t a game last night. Or the night before. The world of sporting events has headed for the collective locker room.

And everyone wonders, “now what?’

When something particularly thought-provoking was being delivered to the reader in the Book of Psalms, the Hebrew word Selah was sometimes used. The internet, being the cornucopia of reliable information that it is, provides us with a plethora of definitions. The definition that resonates for me is “pause and reflect.” In modern speak, the translation would be “mic drop.” 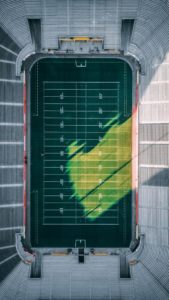 In short order, we are without the particularly engaging and often emotionally charged experience that comes with watching sporting events. In its place is a vacuum that waits for something to fill it. If you think I’m going to say “fill the vacuum with the Lord,” uh, yep, you got me.

But rather than write a lecture, or even an exhortation to step up our Faith Game (see what I did there? Game? Sports Faith? anywho…), I want to invite us to treat our faith in a way that may be different than our usual approach.

I’m reminded of a story regarding former President Jimmy Carter. President Carter was being interviewed by Admiral Hyman Rickover for a job. When asked by Rickover whether or not Carter had done his best at the Naval Academy, Carter eventually admitted that he had not done his best. He hadn’t given his all. Rickover’s final question: “why not?” Carter was left speechless, and then he left the room.

Since God is the Boss of Everything, then everything we do must ultimately be for the Boss. When my time comes to an end, I don’t want to tell the Father that I, like President Carter, don’t know why I hadn’t done my best. With that in the back of my mind, I began to receive a prompting to give more of myself. The “more”  began with small scale changes.

I set aside some time in the morning to read some daily devotions. How long? A few minutes. Like I said, “little things.” The funny thing is, the more time I set aside, the closer I felt to my Father, and to the Son. An even funnier thing: as I got closer, the Holy Spirit began to fill me up.

Wait a second, you think. How does that work?

The Promptings became more frequent. And bigger. Promptings to say things quickly that I usually say slowly – if at all – such as an apology, a word of encouragement, or an expression of commiseration. A feeling that, when I don’t put forth more effort than usual, that I’m not only cheating myself and others, but a feeling that I’m also cheating the Lord. Realizing that my time is short. Our time is short. Realizing that we all have gifts and talents that we have been blessed with by the Father. In the end, we’ll give an accounting of how those giits were used. Did they advance the Kingdom? Did they glorify He who created us? Did our gifts produce Fruits that point to the Holy Spirit of the Lord Most High?

Even bigger promptings. Writing an article, when I hadn’t written an article since junior high. Reaching out to family members to whom I had closed that door of my life. Wanting to reach more people with the message that there’s more to life than what we see, hear, and touch. Wanting to give more of what I have so God of Abundance can bless me with more.

Life will never be the same after this crisis passes, but we humans have a way of bringing a sense of normalcy back to our existence with celerity. We’ll be cheering for our favorite teams and athletes again before too long. But during this time of pausing and reflection, let’s reignite our connection to the Lord. Let’s take the time with Him. Let’s follow the Promptings.