The Gridiron, Part One: Father, Son, and The Game

I tend to simplify things that don’t quite make sense. I doubt I’m unique in that respect… it’s probably the normal thing to do. Once the complex thing is simplified, I find it’s easier to understand. Don’t get me wrong. I didn’t say the formerly complex thing now makes sense; it’s just easier to wrap my head around.

This life is the only thing we know. While our existence and our purpose for living – are always under scrutiny by the examining mind. It can also be simplified. By reducing the immense to a more digestible size, we filter out the distractions and minutiae.

For my simplified worldview, life is football.

No, I don’t mean that I live and breathe football. Instead, it comes down to the notion that life is a matter of moving down the field toward the goal. But I’m getting ahead of myself.

Nobody can say how long the stadium has been around. Most everyone can agree that it wasn’t always there. But one day, it was just…there. The Builder was even more of an enigma. The early players of the game would hear from Him now and then, but nobody ever got a look. The Builder established The Game, including the rules. As the players became better-versed in playing The Game, the rules had to be revised. New rules would also be added.

The Builder wanted to see a well-played game, and He knew the rules would facilitate that vision.

The stands were always full. Yes, The Game had the attention of everyone in the stadium. Some felt the rules stifled The Game’s flow, while others believed the rules made the game.

After some time, The Game seemed bogged down with the rules. The players were spending more time in the rulebook than on the field. Some weren’t playing by any rules at all. Others were attempting to follow the rules with varying degrees of success. The Builder knew …

The Game Had to Change

An announcement was made that the Builder’s Son was going to rewrite the rule book. The Son was given the Father’s authority to establish new plays based on the old rules. A few seasons were played, and then the Son was gone. There was little support and a lot of resentment toward him, so the Father called him back to the home office.

Slowly, ever so slowly, those simplified rules found their way into how the players conducted themselves on the field. It was often found that the best games involved players that followed the Son’s rule book. Sure, there were penalties now and then, but the quality of The Game was much richer.

Over time, additional rules were introduced. And, while well-intentioned, those new rules seemed to get in the way of the flow of The Game. Some folks even said that both Father and Son would be appalled by the changes that were made. “Why mess with a good thing?” they would ask.

It was evident that the best way to play was to keep to the Son’s rules. Nobody since then could match his wisdom. And even though he wasn’t around for long, nobody knew the game better than him…except the Father.

Plenty of stories have been concocted about him over the years. Heck, there are even some folks in the stands who say there never was a Son. Or a Father. Others have even claimed that they are the Son, but they tend to fade into the mélange of players past just as we all do.

The Son not only stands out from the rest of those who played and departed; he will be back at some point. His mission at that time won’t be to establish a new set of rules. No, he’ll be back to see how well everyone played. At some point afterward, a new and improved stadium will be constructed. And The Game will be kicked up a notch. 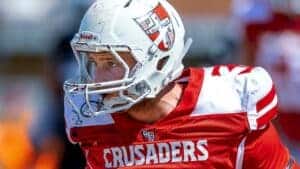 Until then, what is the quality of your gameplay? In the next installment, we’ll get into the nuts and bolts of life on the gridiron. By the time this series concludes, you and I may ready to step up our game.

Both Son and Father ask nothing less.

For more Good News, sign up for the Sports Faith ” Plays of the Day.” We will deliver the Word of God and thought-provoking questions and applications directly to your inbox daily. Get your “Plays of the Day.”