Why be associated with a losing team? Two schools of thought. Two sides of human nature.

We’ve seen it before. The home team is losing. Badly. The cameras then pan across the stadium, and we see the fans filing out, dejectedly. Everybody had high hopes for a decisive victory – or at least a thrilling contest – but after a certain play it becomes evident to the fans that it’s time to head for the exits.

I’m not a professional athlete, but I did stay at a Holiday Inn Express. (If that reference to a commercial from yesteryear fell flat, let’s forget I mentioned it.) The point is, since I have no idea how it feels to see my fans leave, I can imagine that it puts even more of a damper on the endeavor as a whole for the players.

Don’t get me wrong; it’s easy to understand why there’s no reason for the fans to stay:

“I mean, how can any team come back from such a deficit?”

“Bunch of bums. I could’ve watched them suck on TV and saved the money.”

Sure, it’s easy to understand the motivation to leave. And yet:

“Let the traffic clear out. I’m in no hurry to leave. Who knows when I’ll be back?”

“Anything is possible. A win would be capital-A-awesome.”

“They’re my team. Seeing them in person is way better than on TV.”

Uh-oh…I’m about to go deep.

Imagine that some of those folks who departed early showed up for the game with their faces painted to match their team’s colors, but soon found themselves embarrassed for looking that way as the momentum shifted, and their team was on the rocks.

And, on the way out, they begin to ponder: 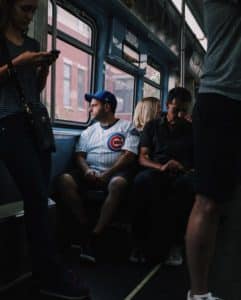 Why be associated with a losing team? Heck, it might even be dangerous to go out into the parking lot looking like a fan of that team!. What if the other team’s fans start ridiculing us? What if the other team’s fans start getting physical with us? It’s not like we’ve met any of those players. Heck, we probably never will. And what do we owe them? They don’t need us to stick our necks out for them. No, it’s best to wash the paint off, keep our heads low, and get to the car.

But those who stay, well, those are the devoted followers of the team. Some of them had been supporters of the team from their youth, having seen their parents support that team as well. Why, for some of those attendees, some of their best memories involve that team. Those stands. That stadium. There’s no way on Earth they’d leave until the game was over. Win or lose, they came to see it through to the conclusion.

You see, some seed falls on stony ground. And while it grows quickly, it has no roots. And in times of persecution, the seed doesn’t produce any fruit. Instead, it withers and dies.

It can look like a fan who washes his face, keeps his head down, and decides just to get to the car.

It can look like Peter, who denied any knowledge of his Friend, to the tune of a rooster crowing in the background.

It can look like any one of us who feel that urge to say that certain something that will point somebody to the Cross, but instead stay silent. And wither. As we consider that missed opportunity – and our cowardice – did we hear a rooster in the background?

As I continue to grow closer in my walk with the Lord, I become more aware of what I need to do in order to become more like the folks in the stadium who stay until the end. 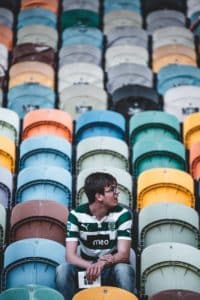 My times of doubt are shorter than they used to be.

My faith grows stronger than ever before.

Rather than say “Thy Will Be Done” through gritted teeth, I say it in faith (tinged with a bit of fear…I’m not quite there yet).

Rather than clutch what I’ve been given with a tight fist, I share with a feeling of goodwill.

Rather than praying when the going gets tough, I talk to my Savior in all kinds of weather.

I’ve gotten up to walk out of the stadium many times before. But I’ve always turned back before exiting.

My place is in the stands.