The Stands: Analogy #2 – The Fifth Quarter

In my previous article, I posited a scenario involving those fans that leave the stadium before the game is over. Naturally, those fans would also miss the Fifth Quarter. More about that in a bit.

Let’s turn our attention to another cohort. They remained in the stands, attentively watching and cheering the big plays. But after halftime, their attention wanders.

Some of them become too drunk to do anything other than irritate those sitting around them. Those irritated fans 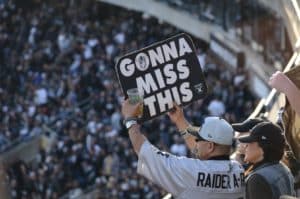 then become belligerent with the inebriated revelers, and now neither of those groups are paying attention to what’s unfolding on the field. Soon, they file out of the stands to “settle the matter.”

Others turn to their “smart”phones to indulge in any number of distractions. Social media, email, you name it. Soon, a quick check of their emails becomes a second half full of various rabbit holes, including: the latest reactionary political diatribe, the reaction to the aforementioned diatribe, the reaction to that reaction, the reaction to (you get the idea), a great deal on the latest ‘Thing You Gotta Have’, that “One Weird Little Trick”™ to shed pounds without diet or exercise, and even the highlights of another game being played at the same time as the one they’re no longer paying attention to.

Still others have left their seats because they found the game to be boring. Since the game wasn’t all they expected it to be, they see little reason to remain. They’re still in the stadium, but they’re wandering around aimlessly. They even coax the “smart”phone zombies to join them in their wanderings.

As fans, all of these attendees have been neutralized. They are no longer present. Yes, physically they are at the game. But they aren’t there.

Mindfulness has been replaced by mindlessness. 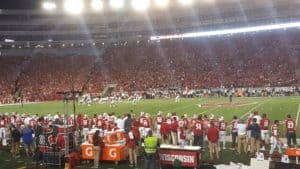 I didn’t grow up in Wisconsin. In fact, I never really got into sports until fairly recently, so I’ve been researching things that I come across in order to be better informed. One of the things I learned that involves sports and Wisconsin – specifically the University of Wisconsin’s Badgers – is the Fifth Quarter.

Checking with a lazy researcher’s best friend, Wikipedia, we learn that the Fifth Quarter is a tradition wherein the UW marching band comes onto the field after the end of the game. Turning to the winning team’s stands, they play the winning team’s school song. The band then turns and plays the school song to the losing team’s attendees. After that, a mini-concert is played with tunes such as “Hey Baby,” and “Dance Little Chicken” (AKA “The Chicken Dance,” which was also something I’d never heard of until moving to Wisconsin). It seems to me like the Fifth Quarter is a fun time, and certainly something I’d stay for, win or lose. I would bet the fans of the losing team find themselves singing and dancing alongside the fans of the winning team! 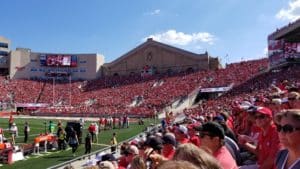 Rivalries are forgotten. Everyone in attendance singing together and rejoicing. For eternity.

Consider, also, those who had become distracted. Distracted and wandering. There, but not there.

Subsequently, they are not able to enjoy that wonderful Fifth Quarter.

You see, other seed falls among thorns. And while it grows for a while, the weeds eventually choke it out.

We have a number of tasks the Lord gives us to accomplish while The Game is played. To name a few:

We must immerse ourselves in the Word. Time must be set aside every day so that we may diligently study the Master’s Lessons.

Every thought must be taken captive.

Every word must be weighed. Idle speech must be accounted for. Words that harm or discourage must be deleted from our mental hard drives.

We must – absolutely must – be disciplined with everything we do while the Game unfolds.

A lion roams in our midst. Day and night. Stealthfully. Deceitfully. If this lion can’t chase us to our vehicles, then it will utilize all manner of distractions to send us out of the Stands so that we will wander until the Game ends.

When the Game ends, the Devouring of the wanderers begins.

I don’t know about you, but every day is a battle to stay in the Stands. Good thing the battle is the Lord’s, and not mine. Alone, I won’t make it. With the Lord, I will prevail.

And with the Lord, so will you.

I plan on enjoying the Fifth Quarter.

I hope to see you there.