Look at it this way: if running any race is easy for you, you’re not running full out.

The Greeks have a rich and storied tradition involving the sport of running. Not only did the marathon originate in Greece; the Olympic Games incorporated running as well (the Olympics did not include a marathon until the advent of the modern Games). Despite the appearance of a victory laurel on the Olympic medal, the laurel did not originate with the ancient Olympiad. Instead, it was given to the winners of the Pythian Games, which were also held in Greece. The origin of the laurel revolves around the Greek god Apollo. 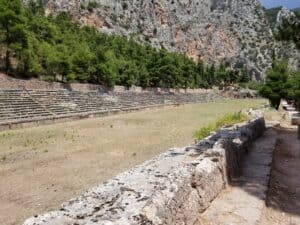 And that concludes this week’s trivia. Hope you took notes…there will be a quiz later.

It is against this backdrop that the Apostle Paul wrote to the Church at Corinth. If you have the time, the history of Paul’s relationship to the Corinthians is worth studying. In I Corinthians, Paul compares the demands put upon those who choose to follow Jesus Christ as those of a runner.

The analogy is brilliant, because Paul has struck a chord that resonated with the Hellenistic people. By utilizing the running theme, Paul knew there would be a clear understanding among his intended audience.

In the 24th verse of the 9th chapter of the First Letter to the Corinthians, Paul states that while all runners in the race run for victory, only one runner is the victor. In following Christ, therefore, each of us must strive to be the victor.

Does that mean we are to live lives of perfection? No. We are all sinful, and we all fall short of the Glory of our Lord. I blame Adam, Eve, and that lousy snake. Nevertheless, here we are.

Because Jesus came here from Heaven, bore our iniquity, and died for our sinful nature, we don’t have to be perfect. Don’t get me wrong; we must constantly strive to overcome our sinful nature whenever and wherever. Look at it this way: if running any race is easy for you, you’re not running full out. 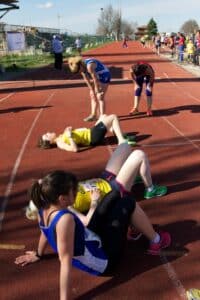 Spent after the race

Paul touches on this concept in verse 25, as he mentions the strict training that all runners must engage in so they may compete effectively.

Jesus can’t use half of a Christian. The Lord uses cracked pots, but not inert lumps of dry clay. Allow me to shine a light on myself and state unequivocally that I have plenty of training that I need to undertake in order to run my race. I feel convicted in my spirit to change things about myself that are in-congruent with my faith, and that process is ongoing. But there is a continual movement of improvement toward the finish line. I’m not the follower I was one year ago, and I have the grace of God to thank for that.

The second half of verse 25 is another clever analogy that speaks to the Greek culture. Rather than being garnished with a laurel of perishable substance, Paul reminds us that we run the Race of Life for a crown that never perishes.

There are all manner of traps and trappings that distract and seduce and derail us during our race. Stumbling is expected. Falling is no surprise to our God. It’s in the getting back up that sets us apart. There is no sense in punishing ourselves at mile number 27 for tripping at mile number 5. We get up, dust ourselves off, and run for the Crown.

And at that finish line, Jesus is waiting for us. How can we not give our all? I encourage all of you who are reading these words (especially the guy typing them) to focus on the race. Eternity calls.