The Gridiron, Part Two: The Gunslinger and The Rules

You’ve been the quarterback as far back as you can remember. You’ve played in the past with varying degrees of intensity. Your focus and dedication to The Game since digging into The Rules have increased. Some may even say that you are a completely different player since those earlier days. You feel different on the field. You’re not as fast, you’re not as accurate, but you’re more pro material than ever.

But getting there wasn’t a smooth journey. 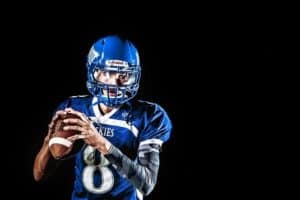 Being a young quarterback was – pun intended – a different ballgame. You recall times you bent (and even broke) the rules to get the first down. But those rules weren’t The Rules. In those days, you played the game by rules that you and others made up.

Both Father and Son were little more than figures of yesteryear … assuming they even existed in the first place. After all, if you can’t see them, how real are they? And “The Rules”? Maybe for other folks, but not you. Moving downfield is what it’s all about, right?

But then you started losing yardage. 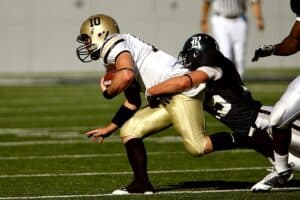 The blocking you relied on for so long is barely functioning. The interceptions increased, and so have the sacks. And what was with the officials? Suddenly, for no reason at all, you can barely execute some key plays before the whistle blows—five yards here, ten yards there. The penalties add up.

From time to time, other players would tell you about getting into The Rules. You know, taking the time to really study how to truly play. But one day, after a particularly bruising number of downs in the wind and sleet, you called a timeout and fell to one knee. 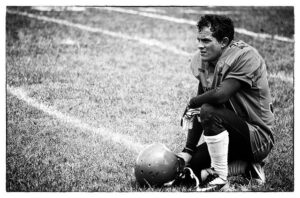 Father, I’ve been playing without you for far too long. I need you. Without your help, I know I can’t win.

Some players leave the field, and some new ones enter. One of them hands you a headset. You’re told the Coach has a new set of plays for you.

Coach? There’s a Coach? I’ve been doing it all on my own up to this point.

You ask who the Coach is. Another player says he goes by many names:

Unsure, you hear The Call for the next play.

What kind of a play is that, you wonder—the snap, the drop back. No open receiver, but there’s a hole. You rush for your first First Down in quite a while.

Another play that you’re not familiar with comes across the new headset. But you connect with another player and another First Down.

Hey, you could get used to this…

His way, you reason, is the Best Way. 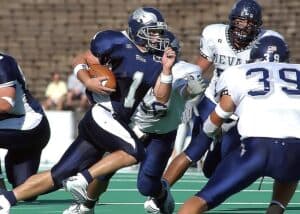 There soon is a flow to how you play. You feel so good about The Game; even the occasional missed pass or fumble doesn’t get you down. You know that you’re supposed to play this way. You wish you played this way from the beginning. But you realize the past makes you the player you are now. And what you do now is what matters.

The Rules didn’t change. And The Game sure didn’t get easier. It seems as if the other team turned on the heat after you called His Name. The officials still blow the call now and then.

You started caring about The Game itself. It dawned on you that it doesn’t last forever. At some point, the time is up, and everybody goes Home. You realized that every play matters. And every player matters. Every player makes the team work. And the team works when everyone is following The Rules. When a player falls, a fellow player helps him (or her) up even if that player is on the other team.

And how you play is carefully watched by another. Every play is scrutinized. The opponent and those of his ilk review every film. They sit across the line of scrimmage from your line. They probe for every weakness so that they can exploit it. Their goal is nothing short of your destruction.

But that’s an article for another time …

For more Good plays, sign up for the Sports Faith” Plays of the Day.” We will deliver the Word of God and thought-provoking questions and applications directly to your inbox daily. Get your “Plays of the Day.”